skip to main | skip to sidebar

The title of this exhibition is Re: Arrange but it could have also been called Re: Purpose or Re: Think or even Re: Start, as all of these descriptors aptly portray the creative process of the artist in their studio. Artists spend a lot of time playing around. Not “playing,” playing, but being creatively playful. Trying new materials, switching things up, moving things around, all in search of inspiration and resolve in the artistic process. What happens when something is removed or added could be the answer to making something work. The artistic process is all about experimentation; trying new approaches. This exhibition brings eight artists together who are playful in their artistic practice.


What a great group of artists to be showing with.  I'm really pumped. 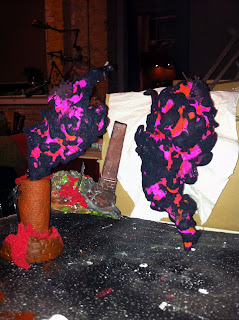 This is a revisiting of Archeron's Bed.  I've reworked all the elements by recreating or making new pieces to further explore this piece that was originally exhibited at LE in 2007.  I'm really excited about how the work is evolving over the years and more reflective of some kind of Dante inspired walk along the bed of Acheron through some primordial/industrial wasteland.

This piece, entitled Archeron’s Bed, references the mythological river of Archeron, the dark and swampy “river of pain”. This mythic river was believed to flow from the living world to Hades, the world of the dead. The duality of this river, with its important connection to both the worlds of the living and the dead, is the starting point for this work.

Archeron’s Bed, revisits and rearranges elements of Porter’s previous work. It seeks to play with and further blur the classical conceptual lines and struggle between the worlds of Humans and of Nature. The installation is simultaneously a vignette of an encroaching industrial and historical scourge, and yet embodies oceanic elements, like coral reefs, mollusks and hydrothermal vents.

Through constructs and reinterpretations of objects, drawn from his own growing and ever changing cabinet of curiosities that he has been building since childhood, Porter’s work explores loss on personal, global and mythic levels, while continuing to investigate the evolution, transgression and dissolution inherent in these themes.

Craig Porter has been practicing and exhibiting since the early 1990s. He holds a BFA – Honours (1991) from York University and an AOCAD (1996) from OCAD, where he is currently employed as the Manager, Faculty of Liberal Arts & Sciences and School of Interdisciplinary Studies. Porter has been represented by LE Gallery, Toronto, since 2004.

Porter’s work over the last decade has explored loss and the entropy of things and meaning through the retelling and recontextualization of myth, literature, popular culture references, the canons of Western European art and the minutiae of his personal experience and collected objects.
at 12:55 PM 2 comments:
Labels: Shows 2012

Jeanette Bicknell, Ph.D. who describes herself as "... a philosopher, mediator, and business ethics consultant" is also teaching in the Faculty where I work at OCADU. So I'm lucky enough to work with her! She recently sent me an article she wrote in her blog on recent changes and challenges to the "droit de suite" (a form of royalty distribution for artists when work is resold) adopted by the EU in 2001. Jeanette gives further historical context for the practice and starts to discuss the ethical and economical issues inherent in managing this system. It is a really great article and very relevant and important for all artists, and something that needs further discussion and consideration here in North America. I hope to see further articles from Jeanette on art.

Here is the link to the article:

http://jeanettebicknell.blogspot.com/2010/11/droit-de-suite-and-canadian-art-market.html
at 6:26 AM 4 comments:
Labels: Things 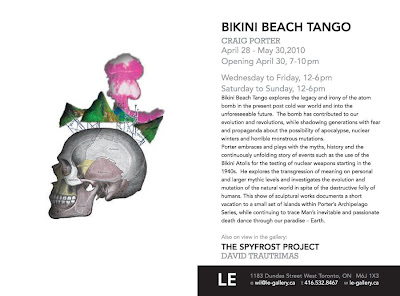 This show is a short stop over from Porter's Archipelago Trilogy to the small grouping of the Marshall Islands, specifically Bikini Atoll. Starting in the 1940s, Bikini Atoll was one of the sights in the South Pacific for the U.S.'s nuclear warhead testing.

Porter explores the legacy and irony of the atom bomb in the present post cold war world and into the unforeseeable future. He explores the transgression and absurdity of meaning in the shadow of the apocalyptic mushroom cloud.

Grass skirts, Geiger counters, Speedos/bikinis and coconut radios (thanks Gilligan!) not supplied, so bring your own!

Me, In An Eggshell

Craig Porter
Toronto, Ontario, Canada
I am an artist living in Toronto, whose main focus is sculpture and installation. I have been showing my work in Ontario, mostly in Toronto, since 1993. I have a BFA - Honours(1991) from York University and an AOCAD(1996) from OCAD.

I use my collections and storytelling conventions as a basis to examine meaning and its many transgressions through constructed narratives of the viewer, the artist, and the things that occupy the space in between. My sculptures and installations often tie mythology, literature, popular culture, the canons of Western European art and the minutiae of personal experience together into a tattered knotted metaphorical tapestry.

My latest projects are a series of shows/installations titled Paradise Lost: Archipelago.

Thanks always to my beautiful wife, Laura, who has been helping me in the studio the last 9 years to bring this work to fruition. Love you always!